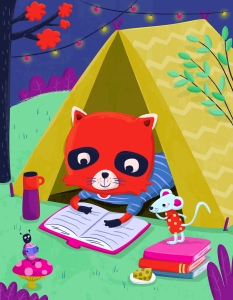 One of the things that really inspired me to become a children’s book illustrator was the work of Richard Scarry. My favorite books of his include What Do People Do All Day? and Busy, Busy Town. His characters were mostly anthropomorphic animals, which I’ve always enjoyed more than human characters. Anthropomorphic animal worlds provide an escape from reality; an illustrator can use them to create atmospheres that seem safer and more innocent than any human world. Moreover, there are lots of opportunities to add funny details to animal characters and the scenes involving them. I love adding little touches like carrot themed prints for a bunny character or fish bone prints for a cat.

As a child I was always delighted to find Lowly the Worm hidden somewhere on the pages of Richard Scarry’s books; nowadays, I like to sneak a little mouse or a bird into my scenes, too. It’s also fun to leverage the stereotypes people have of certain animals. These can be used directly to convey personality traits, or they can be turned upside down (e.g. owl characters that are usually made out to be wise can be made reckless or impulsive). 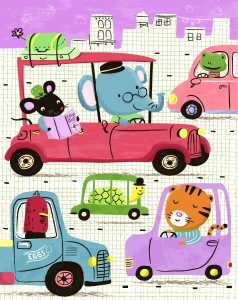 In recent years, I have been assigned more and more projects aimed at very young children. In books intended for babies or toddlers, it is very important that animals are drawn in a clear and recognizable way, with no room for confusion. This is why there are a few animals that are standard characters in board books, namely dogs, cats, bears, and bunnies. The ease with which they can be recognized gives babies and toddlers the confidence to point out what they are.

I was contacted by Nosy Crow (based in the UK) to work on a set of board books called Tiny Tabs. The main characters were toddler-aged anthropomorphic animals. When I started designing them, I kept in mind that they had to be proportioned like toddlers. This meant giving them relatively big heads, and short bodies with round tummies, as well as short arms and legs. But I also had to keep their animal features intact, which was sometimes challenging. 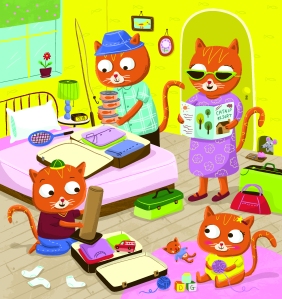 After the first set of Tiny Tabs books was completed, I worked with Nosy Crow to come up with another project. This one also took place in an anthropomorphic world, but targeted an older audience: it was a craft-based story/activity book for girls. We thought it would be good to have a girl bunny be the main character. Her name was Violet Rose, and we populated her world with animal friends that included a bear, a cat, a dog, and a turtle. One luxury of using animals as characters is that their range of actions is not strictly determined by their age. They can be childlike in the book yet do a lot of grown-up things, such as owning their own houses and driving cars. Having to walk the fine line between childlike and grown-up affected how I designed the characters, as I played around with their body proportions to make sure I got that feeling from them. 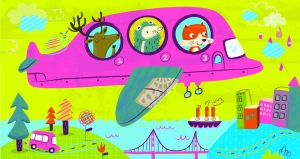 I work in Adobe Illustrator, so I’m constantly breaking my artwork down in terms of essential shapes. I “sketch” directly on the computer. When drawing an animal for the first time, I do a quick online search of photos and artwork of the animal in order to learn its distinguishing characteristics. Once these are taken into account, I have quite a bit of leeway in determining the shape and bodily proportions. I also have flexibility in choosing a color palette; I like using http://www.colourlovers.com as a starting point. Once I enter a search term that describes the theme or mood of the art that I am going for, the site generates unique color combinations I might never have thought of.

Perhaps the most important question when drawing anthropomorphic animals is, Clothes or no clothes? The rule of thumb seems to be that if it talks and walks on two legs, they should have clothes. But there is also the Porky Pig way of dressing (i.e. top with no pants)! My belief is that the clothing convention only needs to make sense in the world that is created. Drawing clothing details for animals on two legs can be a challenge, as, for example, when deciding how to leave room for the tail in pants. That is always half the fun!

The clothing choices in my illustration tend toward old-fashioned. Now that I have a young daughter, I’m more aware of current fashion as well. A good tip I learned is to subscribe to kids’ clothing catalogs for inspiration. Catalogs are also a great source for current color trends, which keeps my illustration fresh. Adding these details to my animal characters and creating their world is my favorite part of being a children’s book illustrator! 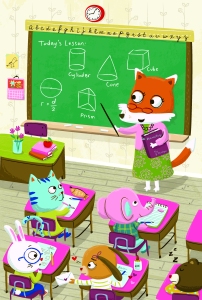