“In Reverence of Resonance”

At the 44th Annual SCBWI Summer Conference, the esteemed Mem Fox, Queen of children’s storybooks, told us that there are really only two themes in all of literature: the “Quest” and the “Stranger Comes to Town.” As a first-time conference goer, I certainly felt like the ‘stranger come to town’ as I navigated my way through the biggest Summer Conference to date – a whopping 1,173 people attending from 19 countries (including France, Japan, Spain and Bangladesh!) and 48 states represented. But with over 400 “pre-published” new attendees just like me, I knew I wouldn’t be alone for long.

There was barely an empty seat in the house and I squeezed myself into a middle row as Lin Oliver, the National Executive Director, took the stage to rousing applause and “We Will Rock You” blared through the Hyatt Century City, California Ballroom. Her faculty introduced themselves next, each marching to the microphone and uttering a single word that defined them (a conference tradition). Soon words like, “Start,” “Community,” “Empower,” “Flexibility,” “Inspired,” “Breathe,” and “Bam!” were flying like plates at a Greek wedding, but the word that resonated with me the most, was, well, “Resonate.”

In the first keynote address of the day, Mem Fox reminded us that timeless books arise from great emotional events that happen to the writer. That our “memories” are “as precious as gold.” And as she read from her book Wilfrid Gordon McDonald Partridge, a story about a child whose grandfather suffers from memory loss, the crowd erupted in applause, tears and laughter. All of us were on our feet. “That was worth the price of coming, right there!” the woman sitting next to me said, as we both groped our purses for tissues. And, this was only the beginning!

At the Editors’ Panel, moderated by Wendy Loggia, Delacorte/Penguin Random House, the question posed was, “What Hooks You?” and “Emotional connectivity,” came up again, along with “unique voice,” “escapism,” “cadence,” “character,” “diversity” and “risk.” Taking risks was also a tenet of the Success Story Panel. Author Stacey Lee (Under a Painted Sky) felt her own journey to publication was a result of attending a prior SCBWI Conference, a risk she took because she felt that she “owed” it to her story. Martha Brockenbrough, who wrote The Dinosaur Tooth Fairy, agreed, adding that prioritizing ourselves with dedicated writing time leads to eventual success. When I found out that it takes 10,000 hours to develop the craft, I gasped, realizing, that it is also a journey of perseverance.

That’s something Sunday’s keynote speaker Shannon Hale (Princess Academy), illustrated well during her presentation on genderless books, when she unrolled a scroll of her own rejection letters, taped end to end, that stretched across the length of the stage. And later, when the charismatic Varian Johnson, author of The Great Greene Heist spoke, I was so enraptured that I lost track of my notes. But the title of his speech summed it up for me anyway, “If it (writing) were easy, everyone would do it,” he said.

Onto the workshops! With over 13 breakout sessions to choose from twice daily, there was something to attract every attendee and I was impressed with how the faculty engaged us in Q&A and interactive formats. In Andrea Brown agent Jen Rofé’s “Strong First Pages,” we analyzed opening paragraphs from a selection of her client’s debut novels and I came away with ideas to strengthen my own.

Saturday night’s “Sparkle and Shine Party” was blinding in its delight. Music, dancing, glitter and costumes galore made for a festive outdoor glamour rave that took place next to the pool, where we munched on Mexican fajitas. I had the good fortune to stand next to national bestselling author Veronica Wolff (The Watchers series). 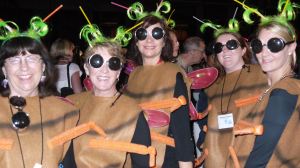 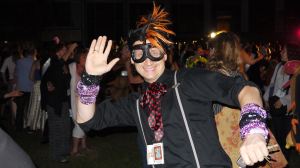 At Sunday’s Golden Kite Awards Presentation I lunched next to Jody Feldman, author of The Gollywhopper Game series, who was kind enough to offer me advice. And a young woman at my table, Anne Berry, won the Portfolio Award for the Illustrator Mentees program! As a thousand people clapped for her, I was inspired again by the strength of our community.

The final conference keynote speaker, 2015 Newberry Award Winner Kwame Alexander (The Crossover), brought down the house with his “Basketball Rules” for success, and his advice to “surround yourself with people who cheer you on, in victory and defeat.” The conference certainly gave me that: community, celebration, inspiration and craft. I came away from the experience with my word: “Believer,” and next year I will be back. But first, I must write!

Julia Markovich has a work-in-progress, Untimely 24, a YA fantasy thriller about a subsection of purgatory for new adults. She lives in Stevenson Ranch, CA.