The best advice aspiring author-illustrator Matthew Rivera received during the mentorship he won from SCBWI-L.A. was to wear a short tie. That’s because he’s working on a story about a dapper, yet fussy giraffe who finds a tie he really likes, but it’s too short for his long neck. Mentor Deborah Nourse Lattimore suggested that Matthew wear a short tie and, as he went about his day, ask himself questions: “How do I feel when I see myself in the mirror? Do I feel self-conscious in public? How do people look at me?” The exercise proved tremendously helpful for putting Matthew into the mind of his main character in order to better illustrate personality.

From The Dapper Giraffe, a work-in-progress by Matthew Rivera

Matthew and Deborah worked together for six months because of the Los Angeles region’s annual mentorship contest, a new program designed to bring value to both PAL (published and listed) and Associate/Full members. Deborah, an award-winning author-illustrator of more than 40 books, and who teaches her craft at UCLA, Art Center and Otis, submitted the winning proposal last year in response to our call for PAL illustrators who would like to mentor. While she received compensation, her real reward seemed to be the opportunity to identify and work with emerging talent. She was an ideal inaugural mentor who set a high standard for the program, which continues this year with a call for proposals from PAL members who are MG and/or YA authors.

Matthew, who decided a year ago to pursue a career in children’s illustration, says, “The opportunity to receive one-on-one feedback from Deborah was a big break.” Her input helped him better pace his stories from a visual perspective. “This was a skill I didn’t possess prior to the mentorship and it helped new scenes take shape in my stories.” See an example below in the before-and-after spreads from his work in progress, My Backyard Desert. The first version, while humorous, doesn’t further the story. The second version creates suspense, which makes us want to turn the page. 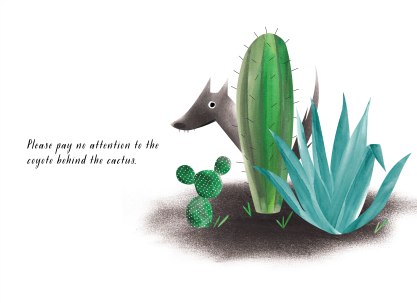 Associate/Full members: Do you want your own PAL mentor? Details for next year’s mentorship contest for middle grade and/or young adult writers will be announced on Feb. 18, 2016.

1 thought on “Before & After with Matthew Rivera: Our Mentorship Program in Action”