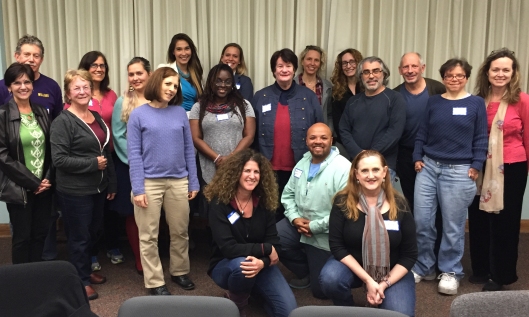 “There is nothing permanent except change.”
-Heraclitus

The Westside Writer’s Mingle kicked off last fall with a bunch o’newness. SCBWI’s oldest local Mingle (since 1990) got a new name, a new location, and new coordinators.

Last June, beloved co-coordinators Karol Ruth Silverstein and Charlie Cohen stepped down after a successful 4-year run to make way for new coordinators, and unexpectedly, a new venue. After more than a decade at the Fairview branch of the Santa Monica Library, the Mingle moved 1.5 miles and roughly 5 minutes west, to the Ocean Park Branch of the Santa Monica Library.

Shortly after, the formerly titled “Schmooze” got an upgrade to a shiny new moniker, “LitMingle,” melding our literary roots with our social mingling of minds.

The new coordinators, Lori Snyder and Laurie Young, made a fresh start in their new digs, honored to carry on the fabulous tradition of gathering together people who care about books and writing for kids.

Here are some fun facts about the coordinators:

Lori teaches yoga every year at the SCBWI National Conference.

Laurie has a BFA in Musical Theater and has been known to hit up a karaoke bar on occasion.

Lori has a background in marine biology and was once a 4th grade science teacher.

Laurie has a book collection that could rival the Library of Congress, housed in an apartment the size of a paperback. (Only slightly exaggerated.)

Laurie is teaching herself the ukulele.

What happens at the Westside Writers Mingle?

Each meeting starts with sign-in and a stop at the snack table, moving onto announcements, introductions, and the sharing of good news. (The best part!) Then, onto the topic of the night where the discussion is lively and enlightening, and often encouraging. Occasionally, the evening may include a writing prompt or exercise to illuminate the theme.

The first six month’s meetings covered such topics as: Writing Tips, Ideas, and Advice; Getting Paid for your Craft; Writing and Overwhelm; Current Book Faves; Setting (and Keeping!) Writing Goals; and the very timely, Diversity in Kid Lit discussion in February.

Upcoming topics will include a critique night, a discussion on how to find an agent, a workshop on honing your pitch, and a guest speaker to come later in the year.

The Westside Writers Mingle meets the first Wednesday of every month from September through June, with a break for some R&R in July and August. All are welcome, from well-published pros to new writers looking to find their tribe.

Laurie Young is a graphic designer, art director, and has an MFA in Fine Arts from UC Irvine. She currently writes picture books and middle grade, and has also conceived and written six books for the novelty market, including I See A Monster and Princess Polly and the Pea. Laurie has been a member of SCBWI for 13 years.

Lori Snyder, an LA native, is a writer, freelance editor, and yoga teacher. She has been a member of SCBWI since 1998. Lori holds an MFA in fiction from USC, currently writes middle grade, and is the author of Tales of Sea & Circus, an online serial for adults. Find her at splendidmola.com.