I have attended Writers’ Days in the past, but the 2016 Writers’ Day was special. Not only because I was awarded a scholarship grant, but also because the day seemed custom-tailored to my current state as a writer. Stephanie Pitts’ amazing talk about “Writing Irresistible Picture Book Characters” provided a lot of wonderful examples from existing PBs that helped to make her points very easy to understand. By addressing topics such as character personalities, voice, and the idea of non-transformative change, she provided actionable advice to authors of all kinds. 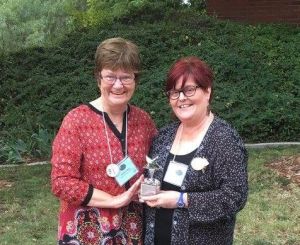 Then Julie Bliven spoke about how to create, edit, and imagine stories that work on a variety of levels. I had researched potential publishers for one of my manuscripts, and Julie’s house came up as a likely match. Hearing her thoughts on what makes a good picture book tick gave me a sneak peek at ways I could make my manuscript more appealing to her and other editors. In addition, the writing gods (AKA Rebecca Langston-George) schemed to put that very manuscript in her hands for critiquing, which allowed me to get one-on-one feedback that will hopefully make my story more likely to be picked up.

Trisha Lawrence returned to Stephanie’s earlier theme of characterization. Her advice for us to “keep asking questions until you hit rock bottom” and turn clichés inside out allowed me to gain valuable insight into what makes some story premises work and others fall flat, the latter of which has happened to me too many times to count. It was also very cathartic to sit through Bruce Hale’s hilariously wonderful presentation on how to face rejection (and other horrors). That fear, more than anything else, has stalled my progress as a writer, but now I feel much more emboldened. It should be required viewing for all SCBWI members so that they too might take heart and keep trying.

Add to that the other great talks, the Bookworm, author signings, illustrator showcase, the wonderful food and networking, and you have a day absolutely without comparison. If you’ve never been to a Writers’ Day before, add it to your to-do list right now. And if you have? Then you’ll agree with me that the next one can’t come quickly enough.

Ian Foutz, a native of Ventura County, is the author of two published picture books (Year of the Dragon and King For a Night, both published by Mascot Books) and over a dozen others that languish on the dusty shelf inside his computer waiting for their moment in the sun. He has previously contributed to the Poet’s Corner feature in Kite Tales and was this year’s recipient of the SCBWI CenCal Writers’ Day scholarship grant. 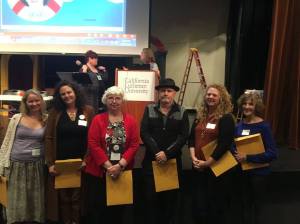 For information, go to http://cencal.scbwi.org

Book Talk is a monthly book discussion group taking place on the SCBWI Central-Coastal California listserv. Discussions begin on the first of each month, facilitated by Lynn Becker. Become a member of the listserv, here.

FEBRUARY: All Rise for the Honorable Perry T. Cook, by Leslie Connor (MG). Perry was raised in Blue River Correctional Facility, and he’s got a heart the size of Nebraska.

MARCH: Wolf Hollow, by Lauren Wolk (MG). Easily one of the best MGs of the year, Annabelle tries to protect her brothers and WWI vet Toby from cruel Betty Glengarry.