In her books Wired for Story: The Writer’s Guide to Using Brain Science to Hook Readers from the Very First Sentence and its follow up Story Genius: How to Use Brain Science to Go Beyond Outlining and Write a Riveting Novel (Before You Waste Three Years Writing 327 Pages That Go Nowhere), Cron maintains that it’s not beautiful prose that captures readers, but the emotions driven by story.

“If beautiful writing is what we really crave, would 50 Shades of Grey have sold 100 million copies?” she asked during her keynote speech at Writers & Illustrators Day on Feb. 25.

Throughout her speech, she gave attendees a snapshot into the science behind storytelling that will help craft a work of fiction that is more than “a perfectly-penned ‘who cares?’”

“Writing is the handmaiden of story,” she said.

And what exactly is story?

“Story is about how what happens affects someone in pursuit of a deceptively difficult goal and how that person changes internally as a result,” Cron said.

In her breakout sessions, Cron focused on the “15 hardwired expectations every reader has for every story.” Among them, “The reader expects that the story will start making a very specific point, beginning with the first sentence.”

In an interview prior to Writers & Illustrators Day, Cron explained her approach to crafting story and why everything we’ve been taught about writing is wrong.

EV: Why combine brain science with the art of storytelling? 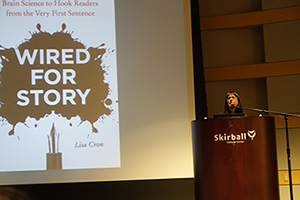 LC: As I say in Story Genius, I think writing is taught wrong everywhere. The problem is, it’s not about writing, it’s about story. People focus on the techniques of writing—What’s my voice? What’s the perfect scene? Or let me learn to write great dialogue, or sensory details that will bring the story to life. It’s these writing techniques that just end up producing manuscripts that are really nothing but a bunch of things that happen… I don’t teach writing. I don’t talk about writing. I talk about story.

EV: In Wired for Story, you say that story was more important to our evolution than opposable thumbs. Can you elaborate?

LC: Story is literally how we make sense of everything. It’s the world’s first virtual reality. Because story takes general things out—big ideas, abstract concepts, dry facts—and it translates them into something very specific that allows us to understand how things are going to affect us, personally. And basically, we come at everything hardwired to ask one question: How is this going to help me make it through the night?

EV: What is the science behind what happens to a reader immersed in story?

LC: They’ve done functional MRI studies that show that when you’re lost in a story, the same part of your brain lights up that would light up if you were doing what the protagonist is doing. It’s not a metaphor. It’s a fact. You really, literally are there. It’s not like you are reading about Jane Eyre, you are Jane Eyre.

EV: Do these rules apply to people writing for children, even picture books?

LC: Absolutely. What grabs us is a sense of surprise. It’s a sense of ‘I thought this one thing was going to happen and something else happens instead.’ And that’s what pulls us into any story and the same thing is true of any picture. If it’s something that’s utterly familiar and is exactly what we thought it would be, it’s kind of boring. What we’re looking for is something that challenges what we already believe and it kind of gives us a surprise.

EV: You’ve talked about how you are opposed to the pantsing and plotting methods of writing. Why don’t either of them lead to story?

LC: I think neither pantsing nor plotting work. I think pantsing is insane. To pants forward is like saying, “I’m going to write a novel or a story about the most important turning point in somebody’s life who I know absolutely nothing about.” Why would you do that? How could you do that? If all stories make a point, and you’re pantsing, you don’t know what the point is. What’s more, the way we make sense of everything from when we’re born until the moment that we die is based on one thing and one thing only: what our past experience has taught us. So, if you’re going to throw someone onto page one and you don’t know what their past experience was, what their misbelief is, or what they want, how can you even begin to create a plot?

And that’s what brings us to plotters, who end up just writing a plot as if a story is about the external things that happen, and then you just throw somebody into it. Not so. A story is about how the plot forces the protagonist to change internally. How the plot forces the protagonist to deal with a longstanding, internal problem—a longstanding misbelief that probably started, probably in in childhood, and is keeping them from getting what they want. And the plot is there to force them to go after the thing they want.

That internal change is what story is about. That’s what grabs us.

EV: Story Genius gives readers a set of progressive exercises that will help them craft a story. How would you recommend someone tackle the exercises? Can or should they read ahead if they’re still working on an exercise?

LC: You certainly could read ahead. It takes a long time to really nail this stuff. It’s not like you can say “I’ll do one chapter a day and I’ll go through it and write this stuff and then I’m done.” It takes a lot of work, and a lot of time, to dig into all of this. I could see reading ahead, but I can’t see working ahead in a straight line. Because as you read forward, chances are you’re going to say “Now that I know more about my protagonist, I’m going to go back and re-do my What If.” It’s iterative. You go back and forth. The deeper you get, the more things change.

EV: Part of the subtitle of Story Genius is “Before You Waste Three Years Writing 327 Pages That Go Nowhere.” But what if you already did that? Do you scrap it?

LC: You know when Anne Lamott talks about writing the sh**ty first draft? She’s right, all first drafts are, to some degree, sh**ty. I love Anne Lamott, but then she makes a common writer’s mistake. She calls it the “child draft,” and says you can romp all over, it doesn’t matter, because you can fix it in post, as we say in entertainment. Nobody’s gonna see it, she says, so what difference does it make? But that’s not true. Someone is going to see it. The most important person of all, and that’s you. The problem is if it doesn’t have any story logic to it, you can’t add that from the outside in. But when people go to rewrite, their tacit first allegiance tends to be to what they’ve already written as opposed to the story they’re telling, especially if they’re not sure what that story actually is. So they end up trying to stitch together a kind of Frankenstein, and then what didn’t work to begin with becomes 10,000 times worse. What I advise people to do is use this method as a diagnostic. When you do, take the story that you’ve written and put it in a folder in the desktop of your head and let it go for now. Don’t worry, it’ll be there waiting for you at the end of the process. And then come back into your premise and really ask these questions and develop it fresh.

Lisa Cron is also an instructor in the UCLA Extension Writers’ Program, and is on the faculty of the School of Visual Arts MFA program in Visual Narrative in New York City. Learn more about her at www.wiredforstory.com or follow her on Twitter: @lisacron. You also can watch her video tutorial Writing Fundamentals: The Craft of Story at Lynda.com, and her TEDx talk, Wired for Story.

Erlina Vasconcellos is the Kite Tales assistant editor. When she isn’t working as a journalist, she is writing — and rewriting — a picture book and a middle grade novel. Find her on Twitter: @noterlinda