Holly Goldberg Sloan is the author of five children’s novels, including New York Times bestsellers Short and Counting by 7s, and the highly acclaimed young adult novel, I’ll Be There. She has also written a number of successful family feature films, including Angels in the Outfield, The Big Green, and Made in America. Her latest movie is Pure Country: Pure Heart, and will be released by Warner Bros on August 1, 2017. The mother of two sons, Holly lives with her husband, Gary Rosen, in Santa Monica, California. She spoke with Karol Ruth Silverstein about transitioning from film to kid lit, writing from multiple points of view, and the inspiration for her work.

Karol Ruth Silverstein: First, thank you so much for doing this interview! After a successful career as a screenwriter and director, what prompted you to get into writing children’s books?

Holly Goldberg Sloan: I stumbled into writing books. I was on vacation in Mexico. I was working for DreamWorks at the time on an animated project. I couldn’t get email, so I was not able to get the studio notes I was waiting for. I had a lot of free time. I started writing a story. When I got home to Santa Monica I kept working on it. I felt free writing with no plan, no deadline. Six months later that story became the novel I’ll Be There, which was published in 2011 by Little Brown.

KRS: All of your novels are told through multiple points of view – and not major characters, but dozens of different characters, some of whom only appear briefly. Can you explain why you’ve chosen to use this literary device? 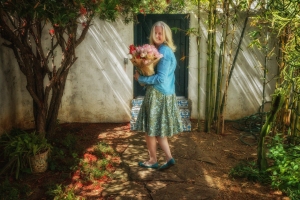 HGS: The point of view of a story is, of course, everything. We all see the world through the prism of our own experience, our own bias, our own limitations and understandings. One of the great things about novels versus film and television is that a writer can shift the storytelling more easily. Point of view can change in chapters. I really liked the television show The Affair because it changed point of view in a very novelistic way. We often saw two versions of the same scene. I loved that. A great literary device is the unreliable narrator. We think just because we are in someone’s head, we should trust them. But no. Who can really tell any kind of story without editorializing? We reveal so much of ourselves in our writing. That might be half the fun of the whole endeavor!

KRS: Your YA novel Just Call my Name and its sequel I’ll Be There are amazing! Tell me how these books came to be.

HGS: I have a great friend, Tim Ellis. And before I left on that fateful trip to Mexico, the two of us had lunch. He told me that his sons had met a boy at their local church. They befriended this kid, but something seemed off–just not right. It turned out that the boy lived with a criminal father and didn’t go to school. Tim told me what his family had done to help. I was so impressed. I started imagining some version of what he’d told me, and that became the basis for my first novel.

KRS: In your first middle grade novel, Counting by 7s, your main character, Willow, is a quirky, gifted kid dealing with the loss of her parents. What motivated you to tell Willow’s story?

HGS: I write contemporary realistic fiction. That means I’m a thief, stealing the world I see and experience. I have two sons. My oldest started at our local public school, but then he took a standardized test, did very well in the math section, and there was some suggestion that he study math with another grade level. I ended up finding a school in my area that was for children gifted in math. It was there that the character of Willow was born. I watched these kids who were academically very advanced, but often socially somewhat behind.

KRS: Your second middle grade novel, Appleblossom the Possum features anthropomorphic characters. What prompted you to tell a story through animals’ POV and why possums?

HGS: I loved Charlotte’s Web. I mean, who doesn’t LOVE Charlotte’s Web? My book Counting By 7s was an E. B. White honor book. That recognition goes to a book that is especially enjoyable when read aloud. I think getting that award put me in a mindset to write something for a younger audience, and to start with the idea that hearing the book read was very important. My dog June provided the final piece of inspiration when she brought us a possum one night. We thought it was dead, but it turned out to be faking it. The idea of ‘playing possum’ didn’t leave me. I decided possums were the actors of the animal world. I was extremely fortunate to get the actor Dustin Hoffman to read the audiobook. And being in the recording studio with him for five days was one of the great work experiences of my life.

KRS: You write delicious antagonists. What’s your recipe for a great antagonist?

HGS: I think flawed people are always more interesting to write about than people who have found balance in their lives. Conflict is drama. We are all flawed, of course, but some of us in ways that have more negative impact to the world. Here’s looking at you, Donald Trump.

KRS: You write both middle grade and young adult novels. Any thoughts of trying your hand a picture books, too?

HGS:  I do want to do a picture book! They are far more complex than people realize. I think in my heart I just like writing characters who are kids. I like the voice of young people.

KRS:  Any parting word of advice or inspiration for writers?

HGS:  Writers write. And we do that to share our stories, but in the end, I think, we write for ourselves. So I guess my advice is to carry on, don’t quit, write what you know, but also what you can imagine. Write on good days and on bad days. Write to set yourself free.

Karol Ruth Silverstein writes various genres of children’s books. She is represented by Jen Linnan of Linnan Literary Management and lives in West Hollywood with her two exceptionally fluffy cats, Ninja and Boo.