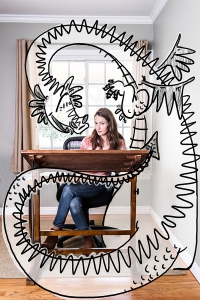 The book industry is filled with tales of people who toil on a story for years before being published. Author and illustrator, Jennie Palmer, isn’t one of them.

Palmer had taken classes on the art and craft of picture books at the Rhode Island School of Design, where she was an illustration major. After graduating, she put that knowledge aside when she became a production designer whose credits include work on the television show Blue’s Clues and 12 years designing floats and balloons for the Macy’s Thanksgiving Day Parade.

And then came the idea for a picture book about witches – a glimmer of an idea that solidified as she was cleaning up after her family’s weekly pizza night.

In 2014, she attended her first SCBWI Summer Conference with an outline. She didn’t have a dummy or a portfolio, but three years later that story, The Wompananny Witches Make One Mean Pizza, would be published by Abrams. 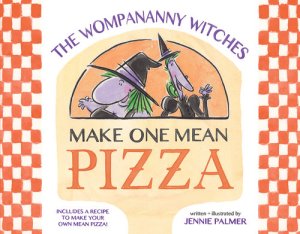 The book tells the tale of kitchen witches, Anita and Winnifred Wompananny, who aren’t too keen on the neighborhood children. One day, after a run-in with some of them, the witches accidentally bake their anxiety and fear into one mean pizza.  When it escapes, it creates chaos around town.

Palmer attended that first summer conference to be inspired while getting a refresher on the craft she had learned at RISD.

“I was sleuthing, but I was rediscovering what my personal style would be,” said Palmer.

In March 2015, she attended Writer’s Day at the Skirball Cultural Center, using the event as a deadline for a working manuscript. She received a critique from author/illustrator and Cen-Cal Regional Advisor, Mary Anne Fraser, who suggested she create a dummy for the book even though the manuscript was ready to be sent out. 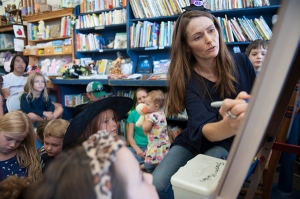 “So that was one way SCBWI was instrumental in getting published,” Palmer said. “There were people along the way guiding me and keeping me on the track I wanted to be on, though it’s up to you to ask the right questions, take the right advice, and do the work. This event kept me going in the right direction.”

By the 2015 summer conference, Palmer had a portfolio and a dummy for Witches.

“I was so happy just to feel prepared and to show my work,” she said.

After trying traditional querying, Palmer pitched her book through #PitMad on Twitter and connected with Jessica Sinsheimer of the Sarah Jane Freymann Literary Agency. Palmer signed with Sinsheimer in December of that year.

A book deal with Abrams followed in July 2016 and Palmer could share the news at the summer conference later that month. 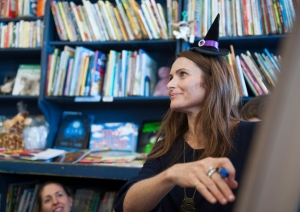 By the 2017 summer conference, she had an advance copy of Witches, which debuted on Aug. 15.

“I’ve been very, very lucky to have everything happen as quickly as it has,” Palmer said. “I know 90 percent of this thing is luck.”

Palmer, who has twins in first grade and another child in fourth, also credits motherhood and the limited time she had to work on her book.

“It was better than if I had all day to work on it,” she said. “I wouldn’t be an author if I wasn’t a mother first.”

It also helped that Abrams wanted a quick turnaround on the manuscript, with Palmer delivering it about three months after signing the deal.

“I didn’t have time to obsess over everything,” she said. 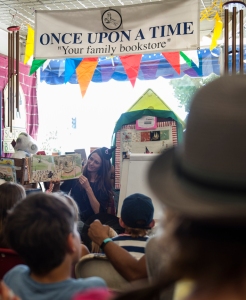 Luck, deadlines, and talent aside, Palmer shares a few strategies she credits for her speedy path to publication:

Learn more about Jennie Palmer at jenniepalmer.com or follow her on Twitter: @imjenniepalmer and Instagram: @jenniepalmerstudio. You can also listen to her talk about making art for a living on the Enthusiasm Enthusiast podcast and watch a video about her creative process by Serena Creative.

Erlina Vasconcellos is the Kite Tales assistant editor. When she isn’t working as a journalist, she is writing — and rewriting — a picture book and a middle grade novel. Find her on Twitter: @noterlinda