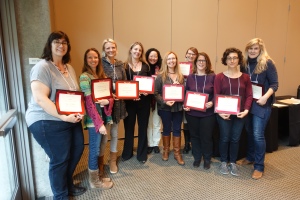 Every year, SCBWI Los Angeles opens our Writers Day contest to all members attending the event. This year, our anonymous judges chose 10 honorees in Young Adult, Middle Grade, Picture Book, and Other (which includes poetry and non-fiction). First place winners in each category receive free tuition to next year’s Writers Day, as well as a manuscript critique from one of this year’s faculty members. There were a lot of wonderful entries and a “20% of total entries” guideline was used to determine how many manuscripts were honored in each category. As Contest Coordinator Karol Ruth Silverstein so aptly put it, “Regardless of whether you win or lose, putting your work out there to be judged by entering the contest is a courageous act in itself. So let me first congratulate all of you who entered.”

And now, our 2018 Writers Day winners! (If you’d like to contact any of the winners to request their manuscript or discuss publication, please let us know!)

RUNNER-UP: Colleen Paeff, The Great Stink: How Joseph Baz el Jet Solved London’s Poop Problem; an energetic and well-researched nonfiction work for older picture book readers.” The Great Stink plops us into London in the 1850s when the River Thames stank from sewage. For decades, tens of thousands of residents have been dying in outbreaks of cholera, and Londoners believe it is caused by smelly air called my asthma (miasmas). Enter Joseph Baz el Jet (Bazalgette), London’s chief works engineer, who proposes to lay new sewer pipes to send sewage away from the city. After the Great Stink of 1858, Joseph gets the resources he needs to build modern sewers—which spare London from future stinks and relieve the city of its cholera plague.

WINNER: Brenda Scott Royce, Side by Side by Science: Studying Vanishing Species—and the Scientists Trying to Save Them; a well-guided international zoological journey, first to the Amazon rainforest in Peru where we meet the macaw. On hikes and riverboat rides, we get acquainted with Inocencio, an amusing scarlet macaw, and soon find out more about him, while learning the recent history of efforts to protect the species. Inocencio, of course, never strays far from the action, popping up again atop a telescope, blocking the author’s view yet helping to illuminate it all the more. The author’s firsthand research brings the animal subjects alive and facilitates writing that is informed, compassionate, and fun to read. 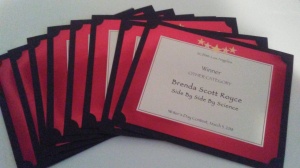 SECOND RUNNER-UP: Sarah Parker-Lee, The Divine Music Chronicles: Split Song Warrior; a story that starts with 16-year-old Fergus O’Leary sitting inside his brother’s freshly dug grave. We are instantly intrigued. When we learn that his brother died in distant battle and there are no actual remains to bury, we are intrigued and moved. By the time we learn that Fergus O’Leary is too small to pass for draft age, and in fact, too small to climb out of the grave without assistance, we’re hooked. Fergus is humming while in the grave — a song that has come unbidden from within him since learning of his brother’s death. The song soon transports him not only out of the grave, but back in time to an ongoing battle with Vikings. An historical drama infused with magic and music and written with touching and straightforward honesty.

FIRST RUNNER-UP: Kendra Kurosawa, Timevaulters; a story that promises a great adventure—full of action in service of a quest, it raises questions from its very first line: “Fifteen minutes is a long time to wait when weather’s on the way.” Suspense and confusion escalate quickly as the stakes rise almost line by line, giving the reader no chance to relax. Within the mounting and mysterious peril, there is the promise of adventure and romance. Hints are given of portals and time travel, and a mission to aid their suffering community, but it is the immediacy of the situation in which first person narrator, Loop, and her childhood friend, turned hunk, Rix, find themselves that compels the reader to keep reading.

WINNER: Debbie Friedman, Star Dust; a story that is written with a refreshingly light touch while offering the promise of courtroom dramatics and intrigue. The murder mystery plot sets up quickly and is instantly compelling. The first-person narrator, Shira, is appropriately at the mystery’s center since the victim was her own mother, and the convicted murderer her father. Shira feels familiar and appealing from the start and her position is credible and sympathetic, as is her isolation. Secondary characters are successfully drawn with a few quick strokes, unexpected phrases give the writing charm overall and the contemporary, almost gossipy tone of the writing makes our YA Category winner accessible and satisfying as well as believable.

RUNNER-UP: PB Rippey, Rise of the Eco Kids; in the first scene, we meet Taylor, an eleven-year-old boy who appears to have spent most of his life in his bedroom with his computer and his beloved grandmother as his only companions. Taylor’s primary interest is studying the sky and the oceans in an attempt to figure out why natural disasters are destroying his world. Today he receives a surprise, though: as he watches the news on TV, he sees his grandmother appear in the middle of a battle between a colossal octopus and King Neptune. The writer’s touch is light, and there are humorous notes throughout these opening pages.  At the same time, Taylor’s fear for his grandmother’s safety feels real, and we immediately have a sense of the emotional stakes in the story. The writer does a deft job of balancing these elements in this delightful excerpt.

WINNER: Alison A. Baker, Roskva and the Runes; the story opens with a girl standing in a stream, trying to catch a fish with her bare hands. She knows she needs to be still to do it; nonetheless, the narration reflects, “She wasn’t a very good rock; she had come to terms with this.” Needless to say, the fish gets away, and Roskva must go home to her family empty-handed, as she has many nights before. But tonight is different: when she arrives at her house, she finds her parents and brother entertaining two mysterious guests who bear a striking resemblance to Thor and Odin. Though their guests are generous, Roskva’s brother doesn’t follow the rules they set, and both he and Roskva end up paying the price. The strength of this excerpt lies in the strong narrative voice: the writer paints a vivid picture of Roskva’s life, her house, and her family. This engaging story promises to offer a different perspective on familiar mythological characters. 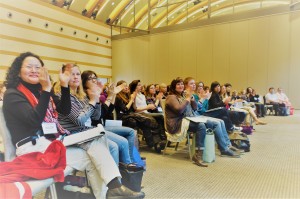 SECOND RUNNER-UP: Jamie Kiffel-Alcheh, Shir’s Wheels; every day at school, J.J. sees Shir’s wheels zoom by and imagines the tricks that Shir could do with his shiny, chrome-tastic, wheeled walker. The other kids don’t talk to Shir.  But J.J. can’t hold back. “Can I try that?” he asks Shir. Shir challenges J.J. to bring his skateboard and meet him at the skate park, where Shir does amazing tricks with his fantastic wheels! Abby Lightning zooms down in her wheelchair, doing flips and figure-eights! Soon, all the kids from their school meet at the skate park. The kids with boards learn tricks from the kids with those awesome wheels that can fly. This fast-paced, dynamic story demystifies the other-ness of kids with disabilities, instead putting a spotlight on their talents and abilities. The author invites all children, with or without disabilities, to open their minds to new, potentially rewarding friendships.

FIRST RUNNER-UP: Chelsea Lin Wallace, Walter; Walter is a house that was once a home, filled with the warmth of family. When that family moved out, Walter’s heart broke. He closed his shutters and turned into a cold, empty house. One day, a new family, Little Girl and Mama, arrive. Walter tries to get them out! He slams his doors, but Little Girl thinks Walter is funny. A frustrated Walter is about to rattle his pipes, when he hears a sniffle. That’s when Walter realizes that Little Girl is missing someone, too. As Walter’s suppressed tears burst through his pipes, Little Girl relates to Walter’s heartache. “You are not alone,” she assures him. Walter feels warm and understood. The breeze blows through his shutters and his hallways echo with laughter. At last, Walter feels like a home again. This original, touching, uplifting story offers a kid-friendly testament to the healing power of love and family.

WINNER: Heather Schmidt, Oh Solo Me Oh; the story of Siegfried, the one-of-a-kind, opera-singing, marshmallow-chomping, Gila monster, is both funny and heartwarming. Siegfried is a cold-blooded reptile, with a warm heart. But his heart is lonely. One day, Siegfried gets a brilliant idea! He would give a concert under the stars with marshmallows for dessert! Who wouldn’t want to be his friend after that? When there are no takers among the various desert creatures that Siegfried encounters, he doesn’t give up. He decides to belt out his heavy heart to an audience of stars. That’s when Siegfried’s touching plea for companionship is answered by an unexpected, like-minded, friend. Siegfried and his new soulmate share music and marshmallows and become two-of-a-kind! Siegfried’s story of hope and friendship reminds us that following our passions and staying true to ourselves is the surest path to finding a true friend.

Congratulations to all our winners!

SCBWI Los Angeles holds several contests throughout the year. Stay up to date on our regional contests page and our Kite Tales #KT250 contest page.