Each year, the J. Paul Getty Museum hosts more than 100,000 children on field trips to view the vast art collection at its two locations: the Getty Center atop the Santa Monica Mountains and the Getty Villa in Pacifica Palisades. Add to that those who visit with their families and take part in family-centered events and activities.

The effort to make art interesting and digestible for children extends to Getty Publications, which in recent years has increased its efforts to publish for the youngest readers, said Getty Senior Editor Elizabeth Nicholson.

“The goal is to support understanding and appreciation of art for all audiences — art, archeology, humanities, ancient world,” she said.

Although some books are published to accompany a Getty exhibit, they’re all meant to be readable on their own.

The books, available through the Getty and also distributed by Abrams, range from picture books to young adult graphic novels. They include two picture books by SCBWI members: author Julie Berry and illustrator Michelle Thies.

Berry is writing the picture book Don’t Let the Beasties Escape This Book! to be published in conjunction with the exhibition, Book of Beasts, a major display of medieval bestiaries — illustrated volumes about beasts real and imagined. It will open in May 2019 at the Getty Center. Berry, has experience with history and research. Her young adult novel, the Printz Honor book The Passion of Dolssa (Viking Children’s Books), is set in the thirteenth century.

Thies, a background artist for the Cartoon Network show Unikitty!, illustrated the picture book Cleo and Cornelius: A Tale of Two Kitties and Two Cities. The book, co-written by Elizabeth Nicholson, Janine Pibal and Nick Geller, was published in conjunction with the exhibit Beyond the Nile: Egypt and the Classical World, currently on view at the Getty Center.

Berry and Thies answered our questions about their books via email. The interviews have been edited for length and clarity.

BRING ON THE BEASTIES

ERLINA VASCONCELLOS:  Congratulations on the Don’t Let the Beasties Escape This Book! How did you become involved with this project?

JULIE BERRY: Thank you! I’m thrilled to be working on this project. I happened to see an email from SCBWI’s LA region PAL (Published and Listed) group saying the Getty sought an experienced author who had experience with medieval subjects and with humor. It’s not the most obvious combination, but I felt, or dared to feel, that it had my name all over it. My novel The Passion of Dolssa was set in thirteenth-century Provence, and several of my books, including The Scandalous Sisterhood of Prickwillow Place (Roaring Brook Press) are comedic — or so I tell myself. I wrote to Getty Publications immediately. If eagerness alone could win me the job, my spastic email would have done the trick.

Elizabeth Nicholson wrote back before long, and we met in person. The more I learned about the project, the more excited I became. Who doesn’t love mythical and monstrous beasts? Bestiaries fascinate me. They’re windows into the medieval imagination, and displays of the beliefs, the art, and the whimsy of the time. And they’re gorgeous.

Driving home from the Getty, the words, “Don’t Let the Beasties Escape This Book” immediately began buzzing in my brain. I developed a proposal around that concept, which was accepted, and away we went. 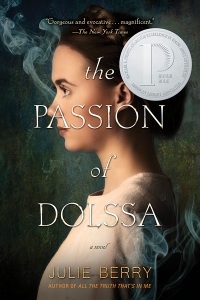 JB: The Passion of Dolssa was research-intensive. It took two years at least. Research began from the moment I first began studying medieval mysticism, heresy, inquisition, and religious persecution, and ended right at the moment the last round of copyedits was submitted. The focus of my novel was a relatively narrow niche in the historical record about which information was somewhat limited, and deeply contradictory, so finding and vetting subject matter experts was crucial. Working with the Getty, I’m fortunate in that my subject matter, experts are readily available to me. Scholars from the medieval manuscripts department at the Getty have been involved in every stage, from the proposal onward, so I can drop them questions about matters large and small. It’s heavenly.

EV:  Any challenges to writing a book tied to an exhibit?

JB: Only, perhaps, the need to get everything done on a tight schedule. The fact that the book should align with a museum exhibit might seem like a creatively limiting factor, but I find that the highly specific requirements actually give me more scope, not less. Tighter parameters demand your best inventiveness. With bestiaries as my theme, my problem is one of an abundance of riches. Having so many beasties to choose from, it’s hard to whittle down the list.

EV:  How do you tackle history for young readers?

JB: The temptation is always there to turn a medieval fictional project into a history book, because it feels as though a great deal of background and context information will be needed for readers to understand what’s wondrous about events in the story. Sometimes that textbook flavor can seep into a first draft, and I need to be very strict about beating it out. I have to trust that if I find something interesting, young readers can, too. I try to go straight for the jugular by focusing on the weird. That which is bizarre, dangerous, and true speaks for itself.

EV: Any other upcoming projects?

JB: I’m also hard at work on a historical YA novel for Viking Children’s Books called Lovely War. It’s a love story set during World War I. I just returned from a research trip to France and Belgium to see the settings, monuments, battlefields, trenches, and fortresses referenced in the book. What a delight this has been, though a sobering and heart-rending one. And, on a very different vein, next fall I’ll have a picture book released by Scholastic Press called Long Ago, on a Silent Night. This Christmas-themed project is very dear to me, inspired by all I felt during my first Christmas as a young mother, holding my own little firstborn child in my arms. It will be illustrated by Annie Won, and I confess I’m a little giddy about it.

BRING CLEO AND CORNELIUS TO LIFE

ERLINA VASCONCELLOS: Congratulations on Cleo and Cornelius. I heard that your work was recommended by one of the co-authors, Janine Pibal, after she saw your business card at an SCBWI conference. Is that true? If so, that’s the stuff of conference dreams.

MICHELLE THIES: Thank you! Yes, that’s true. During the 2015 LA SCBWI Summer Conference, I was very fortunate to win the portfolio showcase. They had winners stand alongside their portfolios as everyone who wanted to see the work came by and flipped through. Feeling on display alongside my work was a very awkward experience for me, but I got to meet a lot of people in a very short time, and one of those people was Janine. She actually pulled out of her wallet my business card from the 2013 Summer Conference — very surprising and flattering! Then when she reached out about Cleo and Cornelius last year, I of course remembered her.

EV: What drew you to this project?

MT: I had previously self-published a comic of sorts featuring two illustrated cats, so when Janine and Elizabeth explained their project and what they were looking for, I felt it was very much in my wheelhouse. Also, being a Los Angeles resident myself, the idea of contributing to Getty Publications (and in some way to the museum) was very exciting.

EV: What kind of research did you do, and how did you align your illustrations with the related exhibit?

MT: Janine and Nick provided a lot of the research for me. I did independently look up visual reference too, but they did a lot of the legwork which saved so much time. They also provided images of the exhibit artifacts and highlighted certain objects which had extra appeal for the illustrations.

EV: Any advice for illustrators working on historical projects?

MT: Have fun with it. I was given a lot of leeway in terms of scale of the artifacts, all the dog depictions, the cats being bi-pedal. I very much enjoyed immersing myself in this historical time period and learning little things that shaped the feeling of the illustrations, even if some of those facts or references weren’t explicitly illustrated.

HOW TO PITCH YOUR IDEA TO THE GETTY

Nicholson is accepting proposals for children’s books (picture books to young adult) that in some way relate to the Getty collection and program. Don’t pitch how-to or instructional books or visitors’ guides.

“We are looking for unique books that both entertain and also foster an appreciation of art,” Nicholson said. “Our website has lots information about the many kinds of art we collect and study, ranging from ancient sculpture to contemporary photography.”

For more fantastic content, community, events, and other professional development opportunities, become a member today! Not sure if there is a chapter in your area? Check here.

Erlina Vasconcellos is the Kite Tales assistant editor. When she isn’t working as a journalist, she writes pictures books and middle grade. Find her on Twitter: @noterlinda