Robert Beatty is the successful author of the New York Times best-selling Serafina series and of Willa of the Wood. His fourth Serafina book, Serafina and the Seven Stars (Disney-Hyperion) was released on July 9, 2019. I met up with him when he stopped in Los Angeles for the opening-day book event at the Grove’s Barnes & Noble.

CHRISTINE VAN ZANDT: Welcome to LA! Serafina and Willa are some of my favorite middle grade characters. Your books spin fantasy and historical fiction together seamlessly. Much of Serafina takes place at Biltmore Estate in Asheville, North Carolina, and includes real-life characters such as the Vanderbilts. How did you choose this location?

ROBERT BEATTY: My family and I live very close to Biltmore Estate, and we visit there often. It’s a place filled with history, beauty, and a sense of mystery, and seemed to be the perfect setting for a magical and spooky story from a young girl’s point of view.

Over the years, I noticed that it’s more fun for kids to learn about history when it comes alive for them, and that was part of what I was trying to do with Serafina. The Serafina books are being taught in over 1,000 classrooms nationwide. Resources for teachers can be downloaded for free on my website.

I have been very fortunate that I’ve had tremendous support from the North Carolina community. Events in my home town of Asheville, North Carolina, can have 2,000 people in attendance.

CVZ: Serafina and the Black Cloak (Disney-Hyperion, 2015) was on the New York Times best-seller list its first week — unheard of for a debut author! What led to this book’s creation? 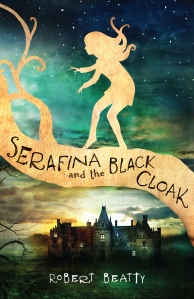 RB: I wrote my first novel when I was 11. After thirty-eight years of writing manuscripts in various genres, querying, and going to conferences, all of my books were rejected. During that time, I married and we had three daughters. When my daughter Camille was about 11, she asked to read my current manuscript. I told her it was only appropriate for grown-ups. A few months later, she knocked on my door and asked again. I was still writing the same novel but Camille doesn’t like hearing “no.” She found one of my old typed manuscripts in the basement, threw it on my desk, and asked me what it was. I said I didn’t write books like that anymore. She said, “Well, you should, because I just read it and I loved it!” Suddenly, I had an audience of one! So I put away the book I was working on and decided to try, for just one day, to write a novel for Camille and her two sisters. As soon as I started writing, I realized that this was what I was meant to do.

Since I’d only received rejections my whole adult writing life, I was afraid my daughters wouldn’t like this new book. To make sure they did, I got them to help me write it because then they would have to like it! After we brainstormed together, I would write. I read chapters aloud to my three daughters and my wife. From their feedback, I began to understand better what the reader experienced as they heard the story. I had a built-in focus group.

We wrote the first draft very rapidly. I didn’t have the option for procrastination because the girls would come home from school, bang through my door, flop down in my office, and say, “Read!” If I didn’t have my chapter done, they would ask what I’d been doing all day.

It used to take me years to write a book. The first Serafina took me about one month to write the rough draft. Then there were about eleven months of revising and editing.

We completed the story and took it to a big conference in New York. I pitched the story to ten agents and all ten excitedly accepted it on the spot. I got ten yeses at once, and that’s when I realized things were about to change. My experienced New York agent took the manuscript to publishers, which is how I ended up with Disney-Hyperion. And that’s the genesis of Serafina and the Black Cloak, which started my long-term relationship with Disney.

From there, we signed a contract with Scholastic for the school book fairs and Penguin Random House for the audiobook. The book has been translated into twenty-two languages. Thanks to the book trailer video we created, Serafina and the Black Cloak was getting lots of preorders before it was even launched.

CVZ: Wonderful! Did anything else contribute to the book skyrocketing to the top of the charts?

RB: The book trailer was key. My daughters told me this was a “thing” but a lot of them were sort of boring, like PowerPoint presentations. We had the advantage of having Biltmore, a beautiful castle, next door.

That video took four months of production planning and four days in Biltmore, about sixteen hours at a time. 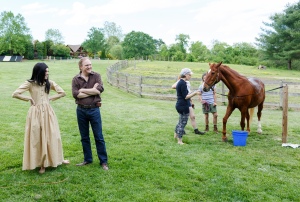 It was a big family project. My daughter Genevieve stars as Serafina and my wife, Jennifer, made all the costumes. Even our Doberman portrays a character from the book.

I fell in love with creating in this visual medium and really enjoyed doing it but I had to focus again on writing.

CVZ: Since you’ve published a best-selling book each year for the past five years, you were very much able to get back to writing.

The second and third Serafina books were released in 2016 and 2017 respectively, Willa of the Wood in 2018, the fourth Serafina book on July 9, 2019, and the second Willa book is expected in 2020. About how long are your books?

RB: They average 75,000 to 85,000 words each, which is on the longer side for middle grade novels. I keep telling myself to write shorter books so that I can complete them faster, but it doesn’t happen. In the end, I have to tell the story in the best way I can, and sometimes that takes a bit more words.

CVZ: We have an upcoming “Ask an Editor” column on what it means to have your book optioned. How did that process work for you?

RB: When Disney-Hyperion purchased the book rights they also wanted the dramatic rights but my agent said no, that we should reserve the rights.

I thought he was crazy, but he explained that just because a publisher wants the dramatic rights doesn’t mean they’re going to necessarily make a film or TV series. If they were serious about immediately adapting the book to film/TV, they would buy those rights separately. Holding onto the dramatic rights provided more flexibility with other companies.

Aspiring writers shouldn’t get too carried away when a publisher says they want the dramatic rights. The publisher is basically trying to get as much as they can, as early as they can. That’s normal in the business world. It sounds wonderful that someone wants the dramatic rights, but that does not at all mean they’re going to make it.

New authors should be aware of this. That’s one of the main benefits of having a good agent. The agent helps you forge a good and positive relationship with the publisher. Disney-Hyperion has been a wonderful publisher to work with. I love the whole team there.

CVZ: Thank you so much for your time and your advice to writers! I look forward to following Serafina and Willa’s stories as they unfold. 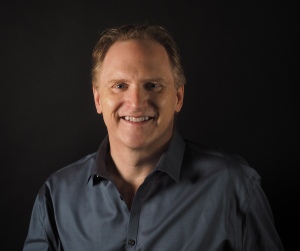 Robert Beatty is the author of the #1 New York Times best-selling Serafina series published by Disney-Hyperion, a spooky mystery-thriller about a brave and unusual girl who lives secretly in the basement of the grand Biltmore Estate, surrounded by the opulence of the Gilded Age and the rugged beauty of the Blue Ridge Mountains.

Serafina and the Black Cloak was a #1 New York Times bestseller, has been on the list for more than 60 weeks, and won the prestigious 2016 Pat Conroy Southern Book Prize.

The second book in the series, Serafina and the Twisted Staff, became a #1 New York Times bestseller in the first week of its launch and earned a “Starred Review” from Kirkus Reviews for being “even better than its predecessor, a sequel that delivers nonstop thrills from beginning to end.”

The third book in the series, Serafina and the Splintered Heart, came out in 2017 to much acclaim.

Enjoyed by both young readers and adults alike, the Serafina books are being taught in over a thousand classrooms nationwide. 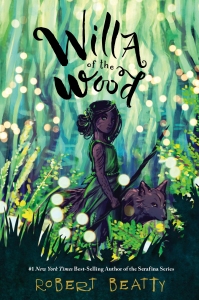 Robert Beatty lives in Asheville, North Carolina, with his wife and three daughters, who help create and refine his stories. He loves to explore the historic Biltmore Estate and the darkened forest trails where his novels take place. He writes full-time now, but in his past lives, Beatty was one of the early pioneers of cloud computing, the founder/CEO of Plex Systems, the co-founder of Beatty Robotics, and the chairman/CTO of Narrative Magazine. In 2007, he was named an Entrepreneur of the Year.

For more fantastic content, community, events, and other professional development opportunities, become a member today! Not sure if there is a chapter in your area? Check here.